BOX OF STORIES FROM RAJASTHAN

Well, call it a Portable Shrine or a Storytelling box, KAVAD is amazing in either way and represents the age old craft originally practiced by a group of Jangid Brahmins near Chittorgarh, Rajasthan. It’s a way of expressing Hindu devotions with the help of images of the Bhakti saints as well as stories of Ram and Krishna in a very interesting way. 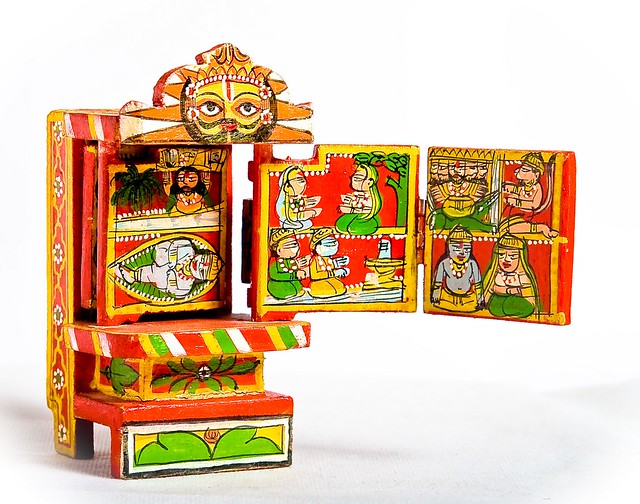 Kavad’s are kind of wooden boxes specifically associated with local communities which came together as “Kavad“. The combination of skills involved are :

THE WORD “KAVAD” AND IT’S MEANING..

In literal terms, the word Kavad can be related to either a ‘Kavaat’ or ‘Kapaat’ or ‘Kivaad’ meaning half a door or panel of a door. Bhanawat (1975) describes the term ‘Kivaad’ as door and the shrine consists of several panels that open up like many doors.

These portable wooden temple contains multiple panels within a panel which unfold outwards on either side, to reveal a shrine in the center. A traditional kawad  (made of Mango or Semal wood) would typically be painted in bright yellow, red and green colors with 10 doors showcasing Krishna’s and Rama’s stories. There are storytellers called as KAVADIYA BHATS who recites these stories in an impressive manner to the listeners. 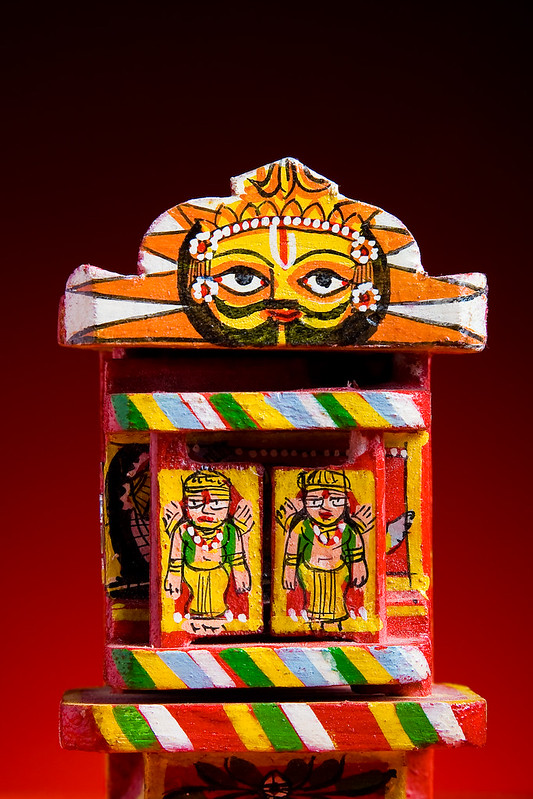 The idea of displaying Bhakti saints and stories of Ram and Krishna in such a way may became prominent during the era of ‘Bhakti movement’. However, thinking of Kavad as a shrine, supports an idea that Kavad is not just a depiction of Hindu Deities on wooden panels but it is a tradition of bringing the pilgrim spots or the holy deity to the people or devotee at their own place.

HOW THE TRADITION BEGAN ?

The Kavad tradition is approximately a 400 or 500 year old tradition of India but its precise origin and timeline is hard to locate because of no strong evidence.

The shrine-like form of Kavad is also attributed to a Brahmini Kundana Bai from Varanasi who seemingly made the first Kavad and gifted them to the storytellers. Kundana Bai collected half the earnings of the Kaavadiyas towards feeding of cows. 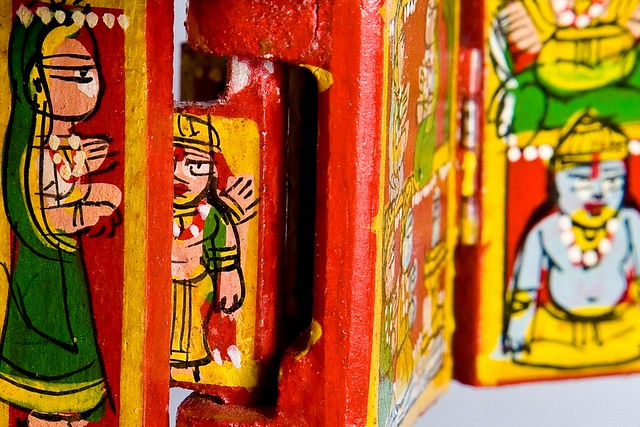 The Kavad has now become an identity to all the communities that are connected to it. The makers get their uniqueness as they are the only ones who make them. The story tellers get their professional identity as the KAVADIYA-BHAT from the very name of Kavad and the term ‘Bhat’ is derived from the caste of the Kavad tradition teller.

The Kaavadiya Bhat periodically brings the shrine to his patron’s house to recite his genealogy and to sing praises of his ancestors.

“Story” is perhaps the oldest form of communication known to humankind. It has a way of mesmerizing the listeners, bringing them together in a way which can never be forgotten. Storytelling has always been a part of India’s rich heritage and Kavad is a part of that.

The people narrating stories on Kavad are known as Kaavadiya Bhats. They are more concerned with the conceptual aspects and for them the word Kaavad means ‘that which is carried on the shoulder’. This tradition is therefore attributed to Shravan Kumar from the Ramayana who carried his blind parents in a Kavad to various pilgrim spots but was accidentally killed by King Dashrath.

The Kavadiya Bhats live around the Jodhpur, Nagaur and Kishangarh districts of Rajasthan. In Mewar, the home of the tradition, it is primarily used to tell family stories including genealogies.

Kavad the traditional storytelling box from Rajasthan – Learn more how to tell a captivating story. Video by- IndiTales

‘Kavad Banchana’, an oral tradition of storytelling is still alive in Rajasthan where stories from the epics of Mahabharata and Ramayana are told along with stories from the Puranas by local communities. Kavadiya Bhats also travel village to village reciting epic stories. They sit in front of the audience and tell the story.

The wooden ‘Kavad’ shrine, provides an audio-visual which made it possible for the listeners to easily visualize the story. The whole scene creates a sacred space wherein the storyteller opens each panel gradually and tells the story depicted there. The portable wooden temple serves as a holy shrine which eventually reveals the sanctum – where the image of the main deity is placed. It is kind of a journey from outside the temple to its sanctum or Garbha Griha.

The specific identity of Kavad makers comes from the place Bassi, a tiny village near Chittor (on the road to Kota). The Suthar community of Bassi, takes pride in being the only Kavad makers in the country. Of the 25 families of Suthars that live there only five or six families are involved in making Kavads. 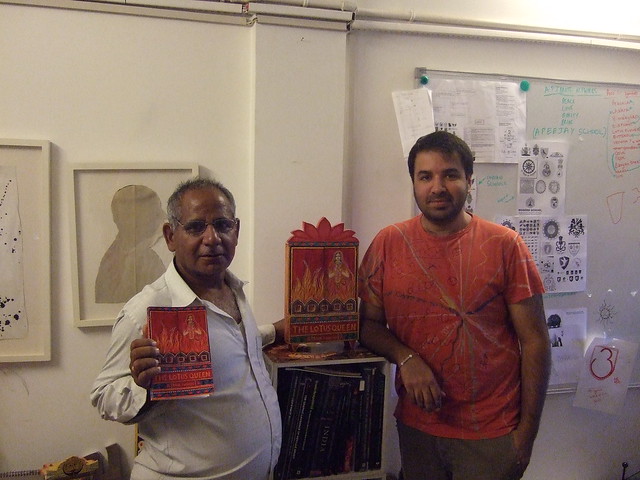 The community of Jangid Brahmins, are also involved with Suthars and they work as both carpenters and painters.

Most Kavads are made from the wood of the mango or semal trees having height of 1’ to 2.5’ and 12 to 16 panels on wooden pivots and metal hinges. The colors used are of mineral origin ( MINERAL BASED PIGMENTS AND DYES ) with color palette of white, red, blue, yellow, green and black. These are mixed with a solution of tree resin which acts as an adhesive.

The original Kavad was always on a red background but nowadays Kavad are made in a range of colors depending upon the function and usage. The colors are applied one by one in layers, adding the depth and detailing in Kavad. The drawings are done using fine brushes completed with black outlines.

The Kavad tradition has somehow survived its course by reaching out to a different world. Introducing Kavad art to the tourists and foreign admirers keep the aspirations of artists high and encourage the surviving makers of Kavads to present themselves to a larger world. But in order to pace up with the modern market there is still miles to go. 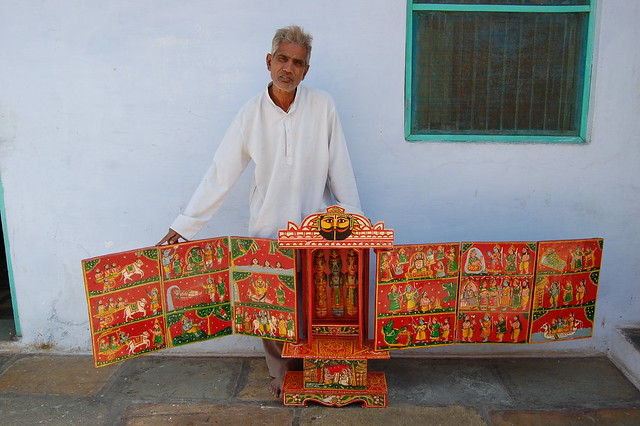 Even in Bassi, there are only a few Suthars left who consider making Kavads a part of their sacred heritage. With changing lifestyles and cultural practices, many have switched into other related work. The craftsmen continue to use their combined skills of carpentry and painting to adapt to new opportunities in a changing world.

TOOLS AND TECHNIQUES OF PAHARI MINIATURE

HERITAGE FABRIC DYEING….FROM JAPAN Let’s continue our talks on Shibori legacy which is a classic example of handmade Japanese craftsmanship. Running over the centuries, “SHIBORI” art is well preserved in rich Japanese tradition and an integral part of their textile culture. The overall process involved in creating a shibori dyed fabric is extremely ingenious. Folding, […]

Very particular to Japan, Shibori is a manual resist dyeing technique which has now became a synonym for fabric manipulation and dying found worldwide. This technique is distinctive in its style and can not be simply thought as “tie-and-dye”. The terminologies are Japanese and thus in most of the languages there is no equivalent term for Shibori and its different techniques. It differs from other dying techniques like ikat, batik, ajrakh, bogolanfini and tsutsugaki and all the shibori traditions together promotes resist dyeing showcasing range of aesthetics, heritage and cultural diversity……

Known with names like “bogolan” or Bògòlanfini means “mud cloth” is a type of sustainable fabric from Mali, Africa. It is handmade traditional cotton fabric which is dyed with natural dyes or mud, then painted many times over with designs and patterns. This amazing African heritage became popular and accepted worldwide as “MUD CLOTH”. Have you heard about it before? Let’s explore it now…

I moved to Canada!