A WALK THROUGH ARABIC ARCHITECTURE

Let’s treat ourselves with a quick walk through the STREETS OF ARAB … and admire this heritage of Arabic architecture.

MASHRABIYA is typically a type of Bay window masking the upper floors of a traditional Arabic building or an Arabic house. It is an integral part of Arab lifestyle since ages and an element of sustainable architecture ornamented with beautiful lattice work and occasionally with stained glass.

It sounds similar to the Harem window in English and serves similar purpose as Rajputi JHAROKHA-. It was designed to ensure the psychological, physical, social, environmental and religious requirements of the time and place in which they appear.

Mashrabiya (Arabic: مشربية‎) is known with names like tarima, shanashil, shanshūl (شنشول) or rūshān (روشان). The most recognize theory about the origin of the term “Mashrabiya” comes from Arabic literature. It is derived from ‘sharaba’, means ‘to drink’ in Arabic. The place designated to Mashrabiya was usually used to store drinking water pots as the window as a means of ventilation helped the water to remain cool for longer period of time.

This Islamic architectural feature shares a vast history dating back to 12th century and Middle ages. Historical records shows their presence in most part of the Middle Eastern cities, Baghdad, Iraq, Iran, Egypt, Malta and other Saudi region.

With the arrival of 20th century, Arab underwent a huge modernization program which leads to the demolition of various historical Islamic architectural features along with Mashrabiyas. But this vernacular architecture is later uplifted back by Arabic arts communities, renowned architects like Rifat Chadirji and artist Lorna Selim, who played major role in revival of beautiful Mashrabiyas.

Their initiatives have done a huge contribution in survival, restoration and celebration of such prominent element which is – Traditional, Beautiful and Sustainable.

MASHRABIYAS ALL OVER MIDDLE EAST…

Mashrabiyas are a part of ancient architecture found in typical Arabic houses. Time also allows changes in the earlier structure of Mashrabiya and turned a Bay window into a highly decorative enclosed balcony.

This marvelous structure of Eastern Arab, was present all over Baghdad, Iran and Iraq. In 14th century, Mashrabiyas gained huge attention of architects and craftsmen especially in Cairo, Egypt. They were transformed from just a store space into a comfortable cozy corner of the house. They were fitted with cushioned beds or sometimes portable seating allowing the occupants to recline in cool privacy and gazing down at the Arabian streets without actually being seen. 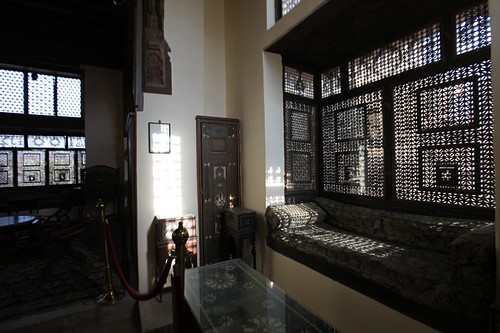 They were expensive and thus at first limited to the palaces of rulers and the homes of the wealthier merchants as an outward sign of success. Later, they were incorporated in Arabic buildings, Mosques, hospitals, schools and other government buildings. They became an eminent part of urban elite houses of Arab.

Mashrabiya became a popular source of ventilation in dense urban areas of Arab because of their presence on upper stories as thus creating zero hindrance in traffic in the busy streets of Arab. Mashrabiyas are not just a window but a multifaceted architectural element. They served multiple purpose like:

In Arabic and Muslim culture, privacy or pardah is an essential part of culture especially for women. Mashrabiya window screened with jalis helped the residents to have a good view of street without being seen. 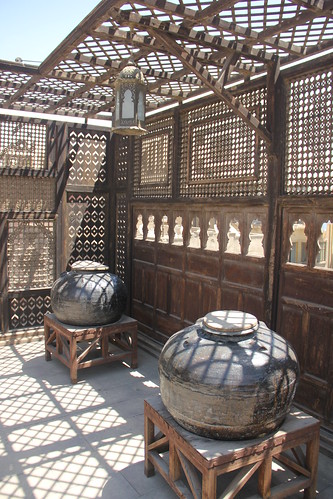 Wooden or Glass screens controls the passage of sunlight and provide protection from hot arid climate of Arab, while allowing the cool air from the street to flow through.

The designs of the latticework usually have smaller openings in the bottom part and larger openings in the higher parts. This provides a significant amount of air moving in the room without causing it to be uncomfortable. The air-conditioning properties of the window is typically enhanced by placing jars of water in the area, allowing air to be cooled as it passes over the jars. 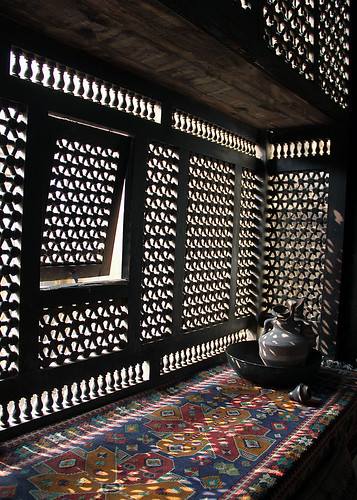 Mashrabiya also provides protection and shade for the ground floor windows that are flat and usually unprotected. Thus maintaining overall temperature of the building.

6. CORRECTING THE FOOTPRINT SHAPE OF LAND –

Due to winding and irregular streets, plots of land are also commonly irregular in shape, while the house designs are regular squares and rectangles. This would result in irregular shapes of some rooms and create dead corners and unconventional spaces. The projecting components of Mashrabiya allows the shapes of the rooms on the upper floors to be corrected, and thus the entire plot of land to be utilized. It also increases the usable space without increasing the plot size.

Made from wood and crafted with stained glass or intricate latticework provide a great exterior facade. These latticework is been a source of inspiration for modern latticework used in creating partitions or panels.

When fitted with cushioned beds or sometimes portable seating, Mashrabiya turns out to be a cozy space allowing the occupants to relax in cool privacy and gazing down at the Arabian streets without actually being seen. 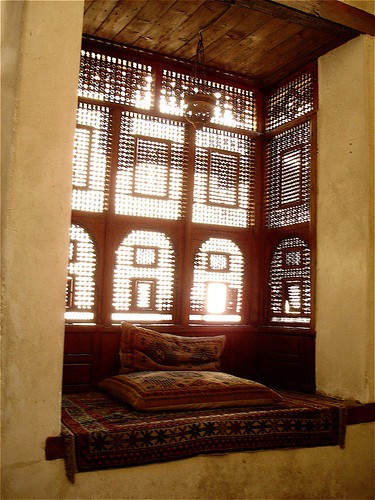 With its multifaceted functions– Mashrabiya is an excellent example of Islamic architecture imbibing all aspects of Islamic lifestyle and culture in such a single beautiful element.

In those times, Mashrabiya’s arrangement, shape, material, color and intricacy was considered to be a display of financial status of the occupants. The whole structure of Mashrabiya enhances the warmth of the building creating confidence and providing bliss to the occupants and inspires creative energy.

As the centuries passed, these ancient windows disappeared in the modern sleek designing. Even architects who copy these components in their modern designing miss the pure essence of the structure as they create the design without the understanding of the implications and qualities these beautiful Mashrabiya holds. Simple designs replaced the original intricacy as shown here-

Modern Architects or Designers must come forward to learn and appreciate these ancient components and make an effort to integrate them effectively into the architectural plans of present-day structures.

Like here in the residential buildings in Abu Dhabi’s Masdar Institute which are inspired from ancient Mashrabiyas controlling interior heat and adds to the aesthetics.

Given the elegance, artistry, practicality and multifaceted approach of Mashrabiya, we will undoubtedly continue to explore new ways of including this beautiful element in modern architecture and will able to see interesting variations of this ancient Arabic structure long into the future….

We have come a long way learning about Miniature pahari paintings of India. This beautiful art was executed in the hilly regions of India, in the sub-Himalayan state of Himachal Pradesh and thus called as Pahari means “from the mountains”. The understanding of this heritage art is a matter of great study. They are quite elaborate in terms of patronage, time frame, painting style, artist approach, themes etc. wherein the broad term for these paintings came out as – KANGRA SCHOOL OF MINIATURE PAINTING. Here is the full read-

Indian miniature Pahari paintings are a broad subject to discuss. After Basohli and Guler, here comes the famous Chamba school of painting. This art has so much to express and has got such a captivating history to explore that makes it even more interesting for an art fanatic like me to get a deeper essence of the subject which is yet unknown to commoners. It is considered as an authentic historical account indicating the ancient art and culture of Himachal Pradesh. Lets find out more about this amazing school of miniature painting.

As we are exploring different schools of Indian miniature Pahari paintings, we came across the two dominant schools- Basohli and Kangra. But there are others including Guler, Chamba, Garhwal and Bilaspur. Guler, became a prominent centre for art and later termed as the birthplace of Kangra painting in the first half of the 18th century. The Guler Paintings or Guler style proved as the cradle of the early phase of Kangra Kalam with the unique blend of Rajput and Mughal style of art. This contrast had brought out the cultural essence of India onto a canvas with the flair of delicacy and a sense of spirituality. In the course of time Guler painting finally get evolved into Kangra paintings.

If I can move to Canada, you can too

AND THE INDIGO TRAIL